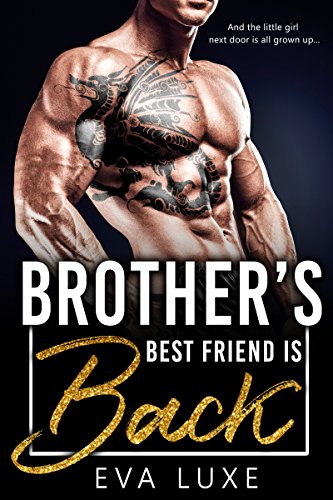 Brother’s Best Friend is Back

A steamy romance featuring a bad boy next door

I'm back and the little girl next door is all grown up.

The last time I saw Chrissy, she was in pigtails and she had a crush on me.
Even named her Ken and Barbie dolls after us and made them play games.
To me, she was just my best friend’s annoying little sister.
Now everything’s changed.
I want to pull that bikini off her womanly curves.
And pull her hair while I take her from behind, for her very first time.
But I’m back in town for a reason– I’m working for her strict father.
He’ll give me the boot if he knows what I want to do to his daughter.

What Daddy doesn’t know won’t hurt him,
because I’m gonna play doctor with her now for real.

Brother’s Best Friend is Back is a standalone steamy romance featuring a bad boy next door and the curvy, feisty heroine who steals his heart. It contains no cheating, no cliffhangers and a happy ever after.

Brother’s Best Friend is Back

My store has moved to Sizzlinghotreads.com. Use promocode NEWSITE TO SAVE 20% OFF Your Order.